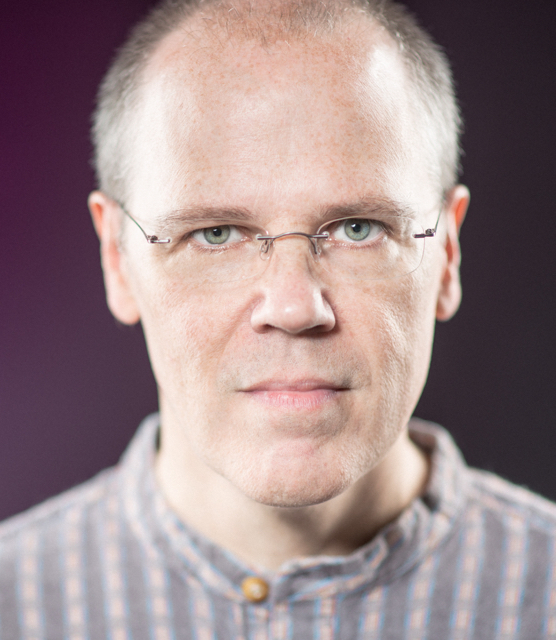 John Gibson composes electroacoustic music, which he often combines with instrumental soloists or ensembles. He seeks to complement and extend the musical inflections of performers with electronic sound, sometimes generated in real time by the software he develops. Originally a composer of purely acoustic music, he retains in his electroacoustic work an obsession with harmonic color and rhythmic pulsation, along with a timbral sensitivity born of his early years as a rock guitarist. His music embraces influences ranging from contemporary classical to jazz, funk, and electronica.

Gibson’s portrait CD, Traces, is available on the Innova label, along with other recordings on the Centaur, Everglade, and SEAMUS labels. Audiences across the world have heard his music, in venues including the D-22 punk rock club in Beijing, the Palazzo Pisani in Venice, and the U.S. Botanic Garden. His instrumental compositions have been performed by the London Sinfonietta, the Seattle Symphony, the Da Capo Chamber Players, Speculum Musicae, Earplay, and at the Tanglewood and Marlboro festivals. Presentations of his electroacoustic music include concerts at the Seoul International Computer Music Festival, the Bourges Synthèse Festival, the Brazilian Symposium on Computer Music, the Australasian Computer Music Conference, the Third Practice Festival, and many ICMC and SEAMUS conferences.

Significant awards include a Guggenheim Fellowship, a Charles Ives Scholarship from the American Academy and Institute of Arts and Letters, the Paul Jacobs Memorial Fund Commission from the Tanglewood Music Center, and a residency in the south of France from the Camargo Foundation. He was a Master Artist at the Atlantic Center for the Arts in May 2017.

John Gibson composes acoustic and electroacoustic music that has been performed worldwide and is available on the Centaur, Everglade, Innova, and SEAMUS labels. He seeks to complement and extend the musical inflections of performers with electronic sound, sometimes generated in real time by the software he develops. His music embraces influences ranging from contemporary classical to jazz, funk, and electronica. He has received significant awards from the Guggenheim Foundation, the American Academy and Institute of Arts and Letters, IMEB Bourges, the Tanglewood Music Center, and the Camargo Foundation. He teaches at the Indiana University Jacobs School of Music. http://john-gibson.com.